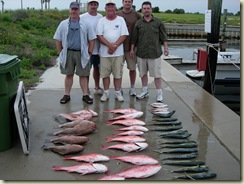 Captain Jeff Lassiter said he'd always had good luck on Friday the 13th, and that was the only day when our group of guys could go. My FIL (yes, I have the best in-laws ever) booked us a 12 hour fishing trip Friday 13, 2008 in the Gulf of Mexico. Getting up at 3:30am was a little harsh, but worth it. We began boarding "Catch It" from Port St Joe at 6am with a cooler full of water and a sack full of food. When deck hand Jim said "You can't come on this boat with that banana" we were worried, but food wasn't the problem...it was the banana. Bananas are bad luck on a boat, or so we were told. Funny to hear it from guys who weren't the least bit worried about Friday the 13th, but we complied.

We stopped on the way out to catch bait fish on rigs with 6 hooks each. The Cap'n would spot a school of fish on his finder, circle a time or two, then we'd "Run 'em down!" Nobody ever reeled in 6, but doubles were very common. It was interesting that 3 or 4 other boats were at this same spot in the Gulf. One could either assume that it really is a small world, or that there might be a Volkswagen or other such illegal artificial habitat dunked there in a prime spot. We were paying guests, and we were treated to something akin to fishing in a barrel. (I couldn't help thinking of "Fall Festival" where the 1st graders "fish" in a wooden box. Someone in the box puts a prize in the young fisherman's clothespin fishing rig and everyone leaves happy.)

Anyway, we left the spot with a live well full of various types of bait fish and headed farther out. We stopped at several spots catching a few fish at each one. I think I might have hung the first red snapper, which turned out to be quite a load. I didn't know what to expect, but red snapper and red grouper are quite a workout to reel up from 150ft down (or however far...I dunno...seemed like a few miles). For the first several spots we were in fairly close proximity to a couple of the same boats I'd seen at the bait fishing spot. I'm convinced the tour wasn't unique.

The crew got all excited when they spotted mahi mahi swimming around the boat. As it turned out, this was exactly like bream fishing with bread off the end of a dock. You'd bait up and dangle it in the water. Two or three would come after it and then there'd be a winner/loser.

We tried a couple of spots looking for some black grouper, but ran out of time and made our 3 hour journey back to shore. I was thankful to have just made it out and back without getting sea-sick, but the fishing was super. We returned with the limit of red snapper and red grouper, a nice catch of mahi mahi, and some white snapper. I wouldn't know large from small, but the snapper and grouper seemed quite nice. Apparently I've now been spoiled by having such great luck on my first and only trip to date, but that's just too darned bad. Life is good great. Thanks Captain Jeff and FIL Rod!